Home»News»Trading health for profit: the business of white asbestos 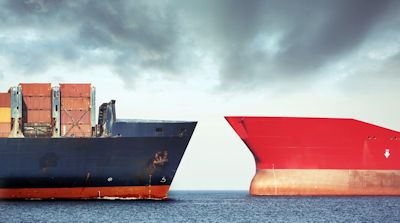 Though banned in more than 50 countries, over 2m tonnes of white asbestos is traded around the world each year. With discussions at a UN meeting due in May on whether to list white asbestos as a hazardous substance, we look at the trade, the reasons it continues and the efforts by some for a total ban.

Asbestos is a generic term used to describe six naturally occurring minerals made up of thin fibrous crystals. Chrysotile, or white asbestos, is the only form still in use, and accounts for 95% of the asbestos mined and used by humans historically. Used in the construction of houses, its curly fibres make it more flexible than a family of five other forms known as the amphiboles – amosite (brown asbestos), crocidolite (blue asbestos), anthophyllite, tremolite and actinolite – which all consist of needle-like fibres.

As Michael Clapham MP said in 2009 when chair of the UK parliamentary asbestos sub-committee, “despite irrefutable scientific evidence, producers are still exporting 2m tonnes every year to the developing world where it causes disability and death and adds to world poverty”.

Trading places
The trade in asbestos has shifted considerably over recent decades. The United States was the leading consumer of asbestos until about 1950, using about half – and often more – of the world’s production in those years. Major sources for the US were Canada, South Africa and Zimbabwe.

Until production stopped in 2011, Canada was a major producer, exporting to the US, Asia, Europe and South America. Though it stopped production, Canada continues to import products with asbestos.

Russia – then the Soviet Union, which included Kazakhstan – became a major exporter in the 1940s, supplying white asbestos to the whole of Europe for decades. From 2003 it has developed other markets, such as China, India and Thailand. China mainly consumes what it produces.

Before 1950, both the UK and the US imported about 50% of South Africa’s exports of asbestos. By the 1970s Japan had become its major importing destination. In the 1970s and 80s, Brazil’s output stayed mainly within the country. In recent years it has focused on China, Colombia, India, Indonesia, Iran and Japan.

Today, year on year, some 2 million tonnes (Mt) of white asbestos is being produced. Though a fall since peak production of 5.3Mt in 1979, with Russia (1Mt), China (0.44Mt), Brazil (0.3Mt) and Kazakhstan (0.24Mt) still heavily involved, mining and exportation of white asbestos is alive and well.

Although the US and the European Union are no longer real markets for asbestos trade, and even though 50 countries had banned the use of white asbestos by 2014, “some countries have maintained or increased their production or use of chrysotile in recent years. Increased usage has been prominent in the Asia-Pacific region,” according to the World Health Organisation (WHO). This includes India where usage has increased from 145,000 tonnes in 2000 to 462,000 tonnes in 2010; and Indonesia which has increased its use of white asbestos from 45,045 tonnes to 121,548 tonnes over the same period.

It may surprise some to know that the substance is still used in the US, which allows many products that include white asbestos to be manufactured or imported, such as flooring and cement sheets. However, usage has fallen massively since 1970, from 668,000 tonnes to one tonne in 2010.

Clearly, the trade sees thousands of people exposed every day. Miners, haulers, manufacturers and construction workers; all are breathing or absorbing this material. In China, according to the WHO, 120,000 workers from 31 asbestos mines come into direct contact with the material; in India approximately 100,000 workers are exposed directly and over 30 million construction workers are subjected to asbestos dust on a daily basis. The number of exposed workers in Brazil is estimated at 300,000.

Given well documented health risks, how can a trade in white asbestos continue?

The persistence of the asbestos trade
By far, asbestos-cement is the most common commodity where white asbestos is used. It is often used in developing countries as a cheap, effective, strong and fire-resistant building material. Given that millions of homes, factories, schools or sheds and shelters continue to use asbestos, we cannot pretend that asbestos does not meet a real need. However, according to Jim Morris at the Centre for Public Integrity – a not-for-profit organisation in the US – the use of asbestos to fulfil this need is the result of a “global network of trade groups and scientists who spent at least $100m since the mid-1980s”.

That producer-countries are making a great deal of money is, of course, a huge incentive to keep trading. Data is difficult to find, as prices for asbestos are negotiated between suppliers or agents and buyers, and not set by large international markets, as is done for metals. However, the US Geological Survey estimates the value of asbestos trade to the 17 producer-countries to be about $500m. The survey says around 8,000-10,000 people are employed in mining and milling; in Russia alone almost 38,500 people are directly employed by the Russian chrysotile industry, with the Russian asbestos cement industry annually producing chrysotile-containing products for the total of 18bn rubles, [$300m] and produced tax revenues of 5.4bn rubles. In Russia alone 400,000 people are said to be related to the chrysotile industry.

Not that dangerous, for some
Those promoting the trade and use of white asbestos do so on the basis of a couple of arguments. The first is that white asbestos is not that dangerous. They say that the ‘needle’ shaped fibres of blue and brown asbestos are very different to white asbestos, meaning the latter presents a far lower risk of disease, cancer or otherwise. John Bridle, of Asbestos Watchdog in the UK, has said that white asbestos fibres in the lungs dissolve away harmlessly. There are problems if it builds up but with some basic risk mitigation measures, there is no reason not to use asbestos, he argues. He also claims that you cannot get mesothelioma from white asbestos as the fibres are not sharp enough to penetrate the lung lining. Though he recognises that India is a problem, in his view, generally, the white asbestos industry adopts strict welfare conditions.

Control and regulation
Supporters of the white asbestos trade also argue that it can be regulated and risks controlled. Modern processes mean that it can be ‘encapsulated’ (for example in modern concrete); that the use of ‘wet processes’ reduce exposure and with the right PPE – like any hazardous substance – it can be used safely. They also argue that it is very good at what it does because of its extraordinarily high tensile strength, poor heat conduction and resistance to chemical attack.

Further arguments are made that substitutes in the form of other fibres are not that good and too expensive.

The Chrysotile Institute in Canada, which closed in 2012, used to offer many of these arguments, pitching a dark history of poor management practices and lethal brown and blue asbestos against a present where ‘safer’ white asbestos is rendered harmless by new techniques and better knowledge. They also made the claim that the countries promoting a ban or restrictions on white asbestos do so because they want to promote substitute materials. Lobbyists both visible and behind the scenes have been an important factor in why the trade of white asbestos continues.

There are, of course, some cost implications of switching to replacements. But according to Dr Barry Castleman, an American environmental consultant who has been researching asbestos-cement substitutes, such as roofing and pipes made with cellulose fibres for the WHO, they cost at most 10% to 15% more to produce.

It should also not be forgotten that workers and trade unions, many of them in the mining industry, press for the production of asbestos to be continued. From Canada to Zimbabwe, workers have called for mines to be reopened, irrespective of implications to their health. In Zimbabwe, workers at Turnall Holdings apparently issued a statement urging the government to reopen the closed asbestos mines because it would help reduce import costs of asbestos and noted that reopening the mines would also provide more job opportunities. Their calls were the latest in a series of similar demands from across different sectors, including the Zimbabwe Congress of Trade Unions and the Chamber of Mines of Zimbabwe, who have also urged their government to reopen the mines.

Health implications
The health consequences of exposure would be hard to imagine if we did not have plenty of evidence to see what they are. Currently about 125 million people are exposed to asbestos in the workplace. In 2004 the WHO estimated that, globally, 107,000 people die each year from asbestos-related diseases. Of these, 41,000 are lung-cancer deaths.

In the US alone, asbestos will be responsible for around 10,000 deaths this year, meaning it kills close to as many people as gun crime or skin cancer. Yet, WHO advice is perfectly clear: “Exposure to asbestos, including chrysotile, causes cancer of the lung, larynx and ovary, mesothelioma (a cancer of the pleural and peritoneal linings) and asbestosis (fibrosis of the lungs).”

Importantly, the WHO cannot identify a threshold for safe use of white asbestos; i.e. for when the carcinogenic risk can be said to be sufficiently reduced. There are also big gaps in the research, including the causal relationship between exposure to white asbestos and specific female cancers.

The UK’s Health and Safety Executive backs WHO’s position. It does not assume that any minimum threshold exists for exposure to asbestos below which a person is at zero risk of developing mesothelioma. It considers that it cannot currently be quantified for practical purposes. HSE cites evidence from epidemiological studies of asbestos-exposed groups to argue that even if any such threshold for mesothelioma does exist, it must be at a very low level.

The struggle
May 2013: the 6th Meeting of the Parties to the UN Rotterdam Convention in Geneva. On the agenda: deciding which substances should be added to a list of hazardous substances, the so-called Annex III to the Convention. One substance in particular – white asbestos – was up for discussion. The other five varieties of asbestos are already listed as hazardous, so it looked like a technicality to add the last remaining version of this carcinogenic substance.

While the convention does not prohibit trade of these listed substances, it would require exporters to establish protocols to inform purchasers about the hazards related to the substances. These protocols are called Prior and Informed Consent (PIC) and sets out a requirement to give advanced notice by exporters to the importers of such substances.

The event saw seven countries argue against adding white asbestos to Annex III to the Convention. For the purposes of the Rotterdam Convention, white asbestos is not considered a sufficiently hazardous substance by India, Kazakhstan, Kyrgyzstan, the Russian Federation, Ukraine, Vietnam, and Zimbabwe. Decisions under the convention must be made unanimously and as a result white asbestos could not be included on the list. It can be traded and distributed with little disturbance outside those parts of the globe that have banned its use, such as the European Union.