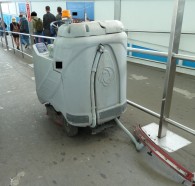 Two firms have been prosecuted after a worker suffered a broken leg when he deliberately steered his ride-on cleaning machine into a balustrade when the brakes failed in order to avoid hitting pedestrians in Stansted airport.

Carl Marshall, 28, of Little Dunmow, Essex, was forced to veer into the central dividing balustrade after brakes on the scrubber-drier machine failed to respond as he rode down a sloping passenger ramp.

As the machine came to a halt, passengers rushed to his aid and helped to free his trapped legs. Mr Marshall suffered a broken right thigh, sprained right knee and two sprained ankles, requiring four days’ treatment in hospital. He has since returned to work.

The incident, on 2 July 2013, was investigated by the Health and Safety Executive (HSE), which today (10 Feb) prosecuted Mr Marshall’s employer, ISS Facility Services Ltd, of Surrey, and the maintenance contractor Michael Laryea, trading as Lamick Floor Machines, of Isleworth, Middlesex.

Chelmsford Magistrates’ Court heard that once Mr Marshall realised the brakes were not slowing the vehicle during descent, he shouted for passengers to get out of the way and pulled the steering wheel hard to the right to slow the machine against the central walkway balustrade. Passengers then came to help and stopped the machine moving further by leaning against it, and then freed Mr Marshall’s legs which had become trapped.

HSE’s investigation found that the scrubber drier machine had a worn and ineffective brake that had been poorly maintained. A second machine was also found to have similar defects.

ISS Facility Services Limited of Genesis Business Park, Albert Drive, Woking, Surrey, was fined £30,000 and ordered to pay £5,490 in costs after pleading guilty to breaching section 2(1) of the Health and Safety at Work etc Act 1974 and Regulation 5(1) of the Provision and Use of Work Equipment Regulations 1998.

Michael Laryea, trading as Lamick Floor Machines, of Elmer Gardens, Isleworth, Middlesex was fined £10,000 and ordered to pay £5,490 in costs after pleading guilty to breaching section 3(1) of the Health and Safety at Work etc Act 1974.

“Mr Marshall’s painful injuries could have been avoided had the ride-on scrubber drier machines been regularly checked in accordance with the manufacturer’s instructions and maintained in good repair. ISS and Michael Laryea of Lamick failed to make sure the machine was safe to operate.

“This has been an expensive lesson for both these businesses to learn; but employers should understand that serious breaches of health and safety law that put workers’ safety at risk are likely to result in similarly serious outcomes.”

More details about working safely with work equipment and machinery can be found on the HSE website at: www.hse.gov.uk/work-equipment-machinery/index.htm